In my last year of elementary school I became very sick. Therefore I went to a Special Needs high school in the Netherlands. I was very lucky that this school was located in my hometown as there are only a few special schools throughout the country. Here you can read more about my period of following special education.

In my last year of elementary school, a stressful period started in which I became very ill. My tumor was actively growing and I was always tired, had no energy, woke up with headaches and often fainted. This way I missed a lot of school. In the end I only visited school to practice for our final musical which was very important to me and I was looking forward to a lot. This quite often met with a lack of understanding from my teacher and classmates. They thought I only came to school for the fun things, which made me feel less welcome.

I always thought I would go to a ‘normal’ high school like everyone else. I didn’t even know there were special schools. But as I was so sick at that time, we realized it would cause problems if I missed this much lessons on a ‘normal’ school. While I visited normal high schools with my classmates, my parents and I also visited a special school in my hometown called ’t Roessingh in Enschede, the Netherlands.

’t Roessingh is a rehabilitation center that partners with a special needs school for children with physical limitations and/or long-term illnesses. At first I didn’t like the idea of going to this school, like most people I thought it was a school for mentally handicapped people. I didn’t belong there! After an intake session and tour around, my opinion somehow changed, but I still felt ashamed and didn’t tell anyone I was going to this school.

Before I could be admitted to this school, I had to prove that I was ‘sick enough’. After a standard procedure consisting of a visit to the GP, various conversations with psychologists and a lot of paperwork, I was finally admitted. Every three years I had to request permission again because the government was cutting back and the requirements were getting stricter. Sometimes classmates had to leave after a few years. This happened to my best friend Roosmarijn. She joined my class in the second year and was very ill at that time. She got better within two years and therefore had to leave. It was hard seeing my best friend go because she was doing better.. which might sound weird! 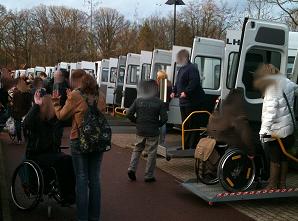 I remember how crazy the first day of school was. I had never seen so many wheelchairs at one place. The classes were no bigger than 10 pupils. You could almost call it private lessons. The school is completely adapted for wheelchairs. There are large elevators and the doors of classrooms are very wide. When a wheelchair driver is out of luck, a technical service was stand by to fix it. There were also nursing and relax rooms for those who needed rest or care. And there were friendly class assistants who were helping with things like going to the toilet, taking medication, rescheduling therapies or simply pushing children in a wheelchair from the taxi to the classroom. Everyone at this school is brought and taken by a taxi bus. This was relaxed, especially in the cold winter months! In the beginning I was a bit embarrassed when I met old classmates.

In the Netherlands, normal schools have a system where they have 2 or 3 years (depending on your level) filled with exams. My sister sometimes had to make an exam every week! Every result counts as a part of your final diploma. As people at my school miss lessons a lot, this would cause big problems. One surgery + recovery and you’re out! Therefore my school did the so-called state examinations. With state examinations you only have central written examinations in May, together with all other schools in the Netherlands, and one week later oral examinations about the material of the last 5 years. The benefit is that it’s no problem to skip school during those five years. You just had to make sure you could attend the final exams in May of your last year. Also, state examinations can be spread over two years. This means you can take four or five courses in the first year and the other courses the following year. This is primarily intended for students who miss many lessons due to their disability / illness.

The school works together with rehabilitation center ‘t Roessingh, allowing you to follow therapies during school hours. You can, for example, have physiotherapy, occupational therapy, creative therapy and fitness therapy. But also other therapies, such as talking with the social worker. Riding School Roessingh was located next to the school. I managed to fix horse riding as a therapy during my school lessons. There was also the possibility to swim, but I never did. So much hassle to get your makeup back in order afterwards. ;-)

Jokes about own disabilities

I learned a lot at this school. It was an eye opener to see how fellow students have managed to accept the most severe diseases and disabilities. People didn’t bully. Actually most people made jokes about their own disabilities which created a good atmosphere.

In the last two years of high school I noticed that I was ready for the ‘normal world’. When my mentor suggested to spread my exams over 2 years, I was determined not to do so. I wanted to be ready as soon as possible. In the end I was the only one in my class who passed all the exams in 1 year.

Taking the step to normal education

Some people told my parents I would close myself off from the ‘normal’ world by going to this school. I would not be able to function properly in society later on and I would run away from my fears. Bullshit, you guys! It was the right school I needed at that time. I was able to develop at my own pace and became stronger than ever before. Of course I was a bit afraid how life at a normal university would be. But it was no deal at all, everything went well and I met some great, lovely people who became my classmates.

Curious about my special high school? Below you can watch a Dutch video.