I was born with a rare benign tumor and doctors told me they did not know other similar cases. For more than 22 years I did not have a diagnosis. My parents and I have never stopped searching and contacted doctors across the globe. April 2017 I did a second opinion in the Netherlands and a few weeks later I got called with a possible diagnosis: Facial Infiltrating Lipomatosis (FIL). Only a handful of people in the world have been diagnosed with this condition. Below you can read more about my youth and growing up with this rare tumor.
> Read more about Facial Infiltrating Lipomatosis
> Read more about my second opinion

I was born with a tumor in my cheek. The doctors did not know which forms I had exactly, all we knew was that the tissue consisted partly of Lipoma and partly of Lymphangioma. However, the associated syndromes did not fit with me. Otherwise I would not have grown older than six years and I would have learning disabilities. The tumor has remained benign so far.

Doctors said that ‘we should be happy with every day we still had’.

Doctors did not know how they could help me. During a lecture led by Prof. Pribaz of the University Clinic in Boston, America, several professors including my own plastic surgeon Dr. Schepel, unanimously agreed that I and my illness are unique. Quite special if you look at it that way, but I would have preferred to be unique in other things that bring less worries.

When I was 9 months old, I had my first surgery. Actually it were two surgeries combined to one big surgery. They tried to remove the tumor but did not succeed. The tumor came back immediately. Also, I had to be operated on my eyes, because my eyelashes grew inside.

The second surgery followed when I was 2.5 years old and lasted 5 hours. Again they tried to remove the tumor. During this operation something unexpected happened. When they touched the tissue, it broke down. This way it was not possible to remove all the tissue and again my tumor was grown back before I even woke up. They damaged nerves in my lip and also discovered a tumor behind my eye. Fortunately they could not reach that tumor, because there was a big chance that the tumor got activated and that I would be become blind. They also removed my salivary gland during this operation, because this would solve certain symptoms. Not…

Problems with my jaw 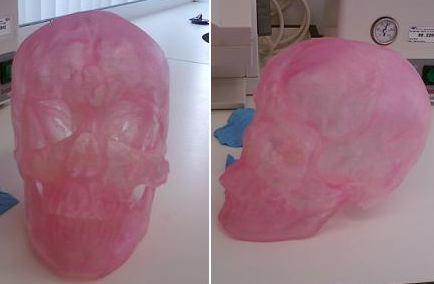 When I was 12, I had my third surgery. This one focused on my jaw, which is also a very rare case and affected by the Facial Infiltrating Lipomatosis. They told me I would get problems in the future, so they removed everything on the left side as a precaution. Before this operation took place, much had to be investigated. My head was recreated in 3D, see the photo on the right. There is still a big surgery waiting, but I will postpone this operation for as long as possible. I think it is nonsense and will only do something when I feel I need it.

All surgeries have had a big impact on my body. A nerve that ran through my tumor is badly damaged. Also, after my surgery in 2006, they damaged a nerve in my lip which caused loss of feeling and a weird pain in my lip. Because half of my face is cut open during operations, I have very large scars. They have managed to hide the scars well through plastic surgery. In the first two surgeries I also ran a very good chance of becoming blind, but luckily that did not happen.

My tumor always grew with me. At one point it was so bad that the tumor grew faster than myself and sowed towards my neck. Every year we did a MRI. That way we could keep track of how bad it had grown. In 2009, however, we got a message that even the doctor did not dare to hope: the tumor had remained stable and not grown for the first time in my life.

We forwarded the results of studies to doctors all over the world. There are already photos of me in America, Taiwan, Morocco, Israel, Australia, Germany, France, Italy, Greece, Belgium, and of course the Netherlands. There were also international lectures about me.

Sometimes there are other provlems that can not be explained. I was at a sleepover once and the next morning I woke up with a bump in my neck. The tissue had to be cut away in the hospital. Occasionally I wake up with a lymph stenosis, which is a stuffed lip or eye. This goes away (until now ..) after a few hours. I also have a lot of problems with my jaw. I was undergoing treatment at Special Dentistry in Zwolle for this. I often have inflammations in my mouth and even had to burn gums just before my final exams. I have a low resistance and I am susceptible, which makes me sick more quickly. I quickly faint and am often tired. That is why I have a wheelchair for exhausting days. I also occasionally get a nosebleed spontaneously.

At this moment there is simply no treatment for this rare tumor. Since April 2017 I do know the name of my condition – Facial / Congential Infiltrating Lipomatosis – and I came in contact with fellow sufferers of this extremely rare tumor. Together we keep an eye on the developments of similar tumors and we look for even more affected people to exchange information. My tumor has spread to my neck, which makes the area too large to be able to do anything. Doctors only intervene when necessary, for example when I get symptoms, become deaf, blind or paralyzed or when my brain is hit. So far, my tumor is still benign and I do not have other tumors, which can change at any moment. But we try not think about that.